Posted on May 28th, by Jack in Articles, Bennington Banner, Writing. No Comments 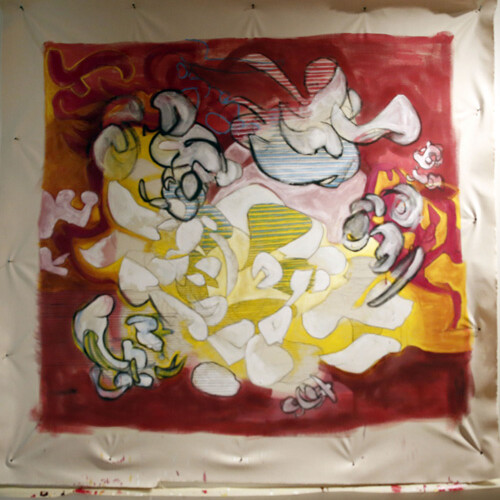 “All of the walls were covered with shelves or doors or windows,” Perry said. “Then we came upstairs to the gallery, and it hit me. We didn’t have any shows planned for this time, so I thought we could use the gallery as a studio. It has become almost a mini-residency.”

With covers on the floor and his unstretched canvases nailed to the walls, Marks has embraced the gallery space as his own quasi-public workspace over the past three months, creating five new works from scratch — in the exact places on the wall where they will hang in his show next Friday, June 6, from 5 to 7 p.m. But the paintings are on public display right now, as they have been throughout the process of their creation.

“Most of the art we see is made behind closed doors. I like the idea of making that creation process visible to everyone,” Perry explained.

Marks said he has been comfortable working on his paintings in the public eye, as it reminds him of the years he spent painting on the streets of Manhattan.

“I spent too many years selling art on the street, before I had a family,” he said. “During the nights when there’s a show here, it definitely feels similar, but there isn’t nearly the same amount of traffic. Museum Mile at 84th and 5th was a busy place. There would be crowds that would spill out into traffic, and that was a weird feeling — having 30 or 40 people watching.”

Marks may not be surrounded by tourists at the VAE, but he has had to adjust to a new presence all around him — his own paintings.

“Years ago, when I used to have a studio in Brooklyn, I used to use the same wall over and over again,” he said. “I’ve definitely never been in a room full of my paintings before. I’ve never been surrounded by my art.”

Working in this new arrangement, he said, the paintings have started to interact with each other in ways he didn’t expect.

“I’ll look at one and think, ‘How do I get that aspect onto this other one?'” he explained.

Although the swirling, psych e delic shapes in his paintings re semble those in his thick sketch book, Marks said each of his evo cative works is original to itself, not a large-scale reproduction of an early drawing or sketch.

“I can’t recreate anything,” he said. “Everything is just whatever hap pens. It always starts with a line of some sort. The line will turn into shapes, and the shapes will begin to interact with each oth er. There’s a push-and-pull that starts happening, and then I start working off that push-and-pull.”

Marks speaks about his ab stractions cryptically, suggesting even he doesn’t fully understand how each one takes its shape. He embraces improvisation and makes decisions by reacting to his previous ideas.

“I’m on a path where I don’t know what’s about to happen, but that’s why I do it,” he said, “and that’s why I keep doing it, because I’m always surprised by what comes next.”

He says he usually goes back and changes or adds to his paint ings after they take their initial shape, adding details and ideas until the painting feels right.

“Some of these I’ll go back into, and some I may not,” he said, like a chess player internally debating his next move. “Sometimes I know that changing one thing is going to make me have to change 10 things, just to be satisfied again. It’s opening a can of worms.”

While this perfectionism may tempt him to tinker with his works in their final stages, he said his paintings usually do reach a gratifying conclusion.

“It’s really about personal satisfaction,” he said. “When you feel that, it’s done.”