Posted on June 26th, by Jack in Articles, Bennington Banner, Writing. No Comments 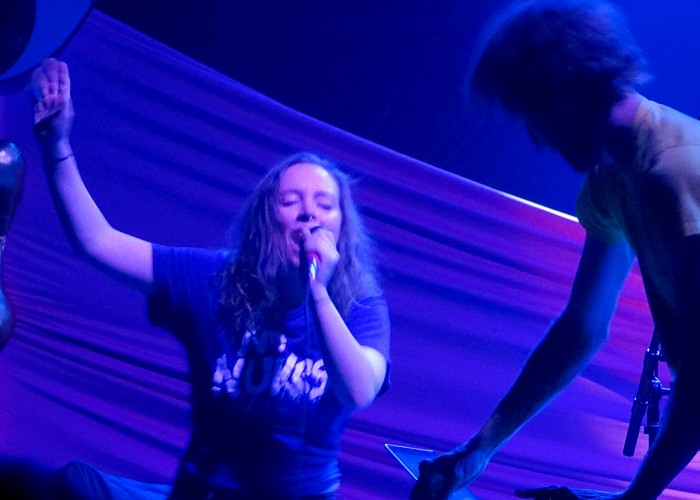 Now, with Mountain Man on hiatus, Meath has turned her focus from delicate, folk-inspired acoustic music to electronic pop with her new band Sylvan Esso. Teaming up with rock bassist and electronic producer Nick Sanborn, Meath has taken on a new role as Sylvan Esso’s frontwoman and lead singer, animating their sparse, smartly constructed songs with a human body and spirit.

Despite their contrasting instrumentation and aesthetics, some of Mountain Man’s sonic ideas survive within the robotic soul of Sylvan Esso. Even high-energy songs like “Dreamy Bruises” and “H.S.K.T” (a humanistic acronym for head, shoulders, knees and toes) are shaded with simplicity and introspection, possibly because Meath is an instinctively quiet singer.

“It is totally different and exciting,” Meath said about her new band, “but at the same time I feel like the message is the same. With both of those projects the idea is to create an artistic expression in the most honest way possible.”

While the ultimate goal of honest emotional expression runs through all of Meath’s musical projects, she says that entering the crazy world of pop music has given her the chance to play with a new set of genre conventions.

“It’s weird, because you’re writing in the context of different stereotypes,” she said. “In folk music, you can get away with writing about the sun and the moon and the stars and hair as much as you want. With pop music, you can sing about f—ing and getting wasted and loving someone forever as much as you want, and you have open license to say some pretty hilariously weird things. Like really overdramatic stuff.”

Turn on any top 40 radio station right now, and it probably won’t take long to understand what kind of hilariously weird statements Meath is talking about here. If you don’t have a radio anymore, a great example is Katy Perry’s “Firework,” which opens with the line “Do you ever feel like a plastic bag?” That song spent a month at #1 and sold over six million copies.

Although the lyrics are certainly more colloquial than any Mountain Man songs — like in “Uncatena” when Meath demands “All I want from you’s a letter and to be your distant lover, that is all that I can offer at this time” — she says she purposely kept her lyrics in the realm of her own understanding.

“In pop music, you have the license to go totally out. With Sylvan Esso, I was trying to figure out a way to ride the line of pop and take advantage of those things, while at the same time writing and singing things that I truly believe in, that I have experienced, and that are part of the human experience.”

Sylvan Esso’s self-titled debut album is available now on Partisan Records, and the band is touring the U.S. and Europe through the fall.

However, between the dancing and strobe lights of her concerts with Sylvan Esso, Meath says she still think fondly about her time living near the North Bennington Train Depot.

“One of my favorite things was being woken up by the train every morning,” she said, “And going to The Tubs, and getting avocado, egg and bacon sandwiches at Powers. I had a wonderful time.”