Posted on May 7th, by Jack in Articles, Bennington Banner, Writing. 4 comments 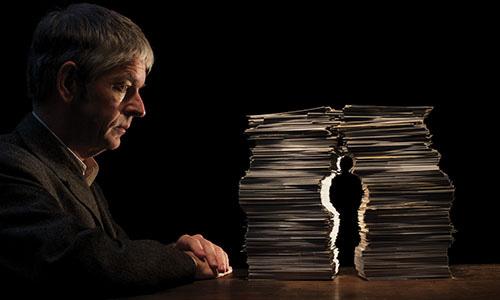 Although he said he’s not otherwise a big Chekhov scholar, Dawson said he found the story fascinating.

“In some ways, I don’t really care whether it was Chekhov or not,” Dawson said. “It’s really about how a man did this thing, and what a thing to do! To decide to go and do that on your own, not knowing if you would even come back alive. It’s pretty brave and pretty crazy.”

In preparing to tell this story, Dawson traveled twice to the remote island of Sakhalin and worked closely with Chekhov scholars and neuroscientist Dr. Jonathan Cole, who first introduced him to the book. Dawson explained the book is more of a medical thesis than a work of literature, as Chekhov was also a trained medical doctor.

Dawson said working with Cole gave him valuable insight into Chekhov’s experience at the Sakhalin colony.

“What Jonathan reminded me of, as a clinical neuroscientist and as a doctor, is that before anything else, a doctor is someone who can see, as an observer,” he said. “He told me that when you walk into a doctor’s office, he can look at you and pretty much see what’s wrong with you from the color of your eyes, the way you’re sitting and the first thing you say. He can tell a lot of neurological disorders just from looking at you. And we realized that’s what Chekhov was doing.”

After three years of work on “The Russian Doctor” and three performances in England this spring, Dawson is bringing the performance piece to Mass MoCA’s Hunter Center for its U.S. debut. This will be Dawson’s second time working with the museum, having performed another piece, “Absence and Presence,” in 2005. Sue Killam, Mass MoCA’s managing director of performing arts, said they’re very excited to have Dawson back.

“He’s a really subtle and thought-provoking performer,” Killiam said. “I think his work is just beautiful in the way he combines movement with theater and storytelling.”

Rather than acting out the story himself, Dawson explained he will incorporate mixed media elements like sculpture, and video projection and music to present the story to his audience.

“Rather than it be like a play, where I’m playing the different characters or pretending to be different people, I physicalize the characters and try to evoke the spirit and feeling of what it was like to be Chekhov at that time,” he said.

“I’m never at any point pretending I’m Checkhov,” he added.

In preparation for the performance, Dawson is also participating in a two-week residency at Mass MoCA, which gives him the opportunity to fine-tune the show and adapt it to take full advantage of the museum’s flexible performance space.

“What Mass MoCA has given me, which you can’t get anywhere else in the world, is the chance to come here for two weeks and just knock about,” he said. “It is unbelievable to have a 10,000-square-foot theatre, like the Hunter Center, with a full rig and a crew that will do whatever you want.”

Dawson said he started getting new ideas for the piece during the first day of his residency.

“We suddenly got in the room and said, ‘Oh, we can do this and we can do that.’ So, I think it will change a lot in the end, all for the better,” he said.

Killiam explained theater performers rarely get an opportunity to spend time perfecting their works in the space they will be performing it, and past residencies have helped artists find creative new ways to engage their audiences. The museum typically hosts six to eight artists each year for residencies. Past participants include choreographer David Neumann, David Byrne and Alex Timbers, Laurie Anderson and Phillip Glass.

“It’s just an opportunity for us to give back to the field, where we can help artists create the very best work they can create,” Killiam said.