Posted on May 7th, by Jack in Articles, Bennington Banner, Writing. No Comments 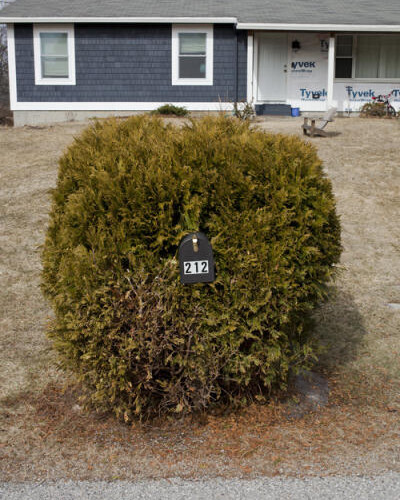 He’s also particularly interested in committing bits of artistic mischief, like his decision to place an exuberant sign that reads, “1 Buy 1 Get Free,” above the service counter in the cafe. After enough confusion, the cafe’s owners responded to the piece with a small cardboard sign that explains it as artwork rather than a confusing sale on coffee.

“I’m pretty happy with it,” Angus said. “I’d say its a run-away success. It’s amazing that people don’t even look. It takes them awhile to actually get it, which is something that I’m always looking for. It’s very easy to ignore or just accept your environment. There’s a lot to see — at least for me.”

The idea of looking at, seeing and understanding our surroundings is a major theme in “Humors.” Like most of the things McCullough creates, the title works on both obvious and more obscure levels.

Made up of two separate, but related projects presented in an elaborate site-specific installation, “Humors” promises to be an immersive, unique experience that will give the Regional Art Gallery a new look and feel.

Speaking to his interest in architecture, McCullough is installing a screen door on the gallery entrance and putting a vinyl-sided house within the gallery to accommodate one of his two main projects, “Embodied Realities.” This project brings together a series of Angus’ performance art pieces, captured on video to play on a long loop inside the house.

All shot in and around town, the videos each capture a simple thought about life in Bennington, like one that shows Angus lacing up his ice skates and skating circles on a comically small ice puddle in North Bennington.

“These videos are kind of funny, and they’re just very short, simple ideas that hopefully get to something,” McCullough said, “either a criticism or the creation of some idea in a mind.”

“The show is really about Bennington in a big way,” he continued. “Bennington as a way to see the world, or our human environment, or whatever.”

Following this theme, McCullough’s other project is a series of photographs, “The Bushes of Bennington County.”

After starting the project as a joke, Angus explained he started looking and thinking more about the various bushes, hedges and shrubs he hadn’t consciously noticed before.

“They’re something people put a lot of thought into, but perhaps we don’t look at them very closely, or very keenly, because they’re just part of the normal environment,” he said. “They’re so personal. They have a lot of life in them, they have a lot of character, and they speak a lot about the people who own them or take care of them.”

“Anybody, who lives in Bennington and views all of the images in the series, will immediately start to recognize some of these bushes,” he said, “but at the same time, they look completely foreign, because, like any great artist, Angus has a very specific, particular vision of the world.”

After spending his childhood visiting and spending summers in the Bennington area, Angus now lives here full time, working in a studio at the Vermont Arts Exchange. This deep, evolving relationship with the area gives him an unique perspective on what it means to live in Bennington, as he’s both sharply aware of local history and still experiencing aspects of Bennington life for the first time. This tension between modern and romantic views of Vermont is especially apparent in his work.

“The screen door and the vinyl-clad house — they’re not just random choices” noted Franklin. “We think of Vermont in terms of these grand 19th-century churches and houses and buildings, but a lot of the built environment that we live around today in 2014 are not like that. Vinyl ranches are probably the most ubiquitous forms of housing in Bennington.”