Posted on May 28th, by Jack in Articles, Bennington Banner, Writing. 1 Comment 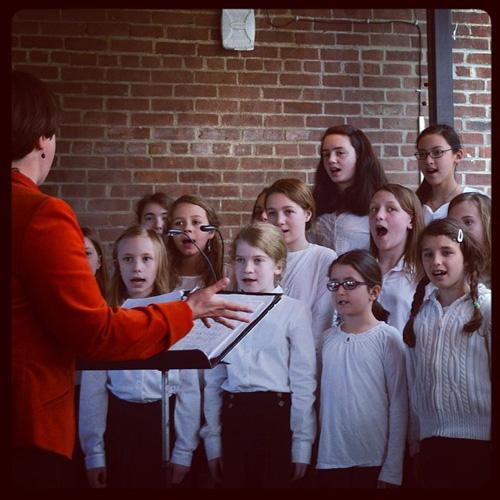 “I have a wide variety of tastes, and over these 20 years I have figured out the kinds of things that work with the kids,” said chorus director Kerry Ryer-Parke. “I have to say, these kids are so game for anything. The harder and weirder it is, the more they like it.”

In celebration of its 25th anniversary, the chorus will invite all former members to join them on stage for performances of old choir favorites, “Path to the Moon” by 20th century English composer Eric Thiman, and “Child’s Play,” a song that Sage City Symphony founder Louis Calabro composed for the chorus.

The performance will also include the world premiere of a new composition by Bennington College faculty member Nick Brooke and a performance of “Song for Anne,” written by Williams College senior Maia McCormick.

Brooke said his piece is inspired by a letter he received when he was working at an environmental advocacy group after college. He explained the group often received letters offering advice about how to solve the environmental crisis, and one day he opened a letter that began with the phrase “this is about putting humans on other planets,” which Brooke has adopted as the title of his new composition.

“It was one of the most creative and off-the-wall letters I had ever received, and it was beautifully written, so I used that text as the main text throughout the piece,” Brooke explained. “And you can guess the solution it proposes for saving the world.”

Brooke described the piece as “very fast and frantic, like the thoughts of the person who wrote the letter.” Local cellist Nathaniel Parke will accompany it, playing what Brooke calls a “slightly manic” cello part.

“I’m conducting it, because it’s insane and in all these meters,” Brooke added.

McCormick, working with the chorus as a conducting assistant, has based her song on quotes from the diary of Anne Frank, and the choir will sing it in Frank’s native Dutch.

“I don’t speak Dutch at all, so the young woman who composed the piece was helping them work on their Dutch, and they sound incredible,” Ryer-Parke said. “We have some Dutch-speaking grandparents, and they’ve said, ‘My God, they sound completely native!'”

According to Barbara Kourajian, the chorus’ founding director, the chorus of young singers, ages 7 to about 17, has a longstanding tradition of singing masterworks in foreign languages. The chorus still performs pieces by well-respected composers, which was one of Kourajian’s founding principles in starting the group.

“It was started with the idea in mind that kids would sing the very best choral literature, and they can do it,” Kourajian said. “Kids are just natural artists. They’re highly capable of singing very sophisticated music.”

Ryer-Parke said she’s mpressed by the abilities of her young singers, who regularly perform music intended for college choirs.

“If you come to the concert, you’re going to leave feeling much more hopeful about young people, and education, and the infectious enthusiasm these kids have and the high level of music-making that they’re doing,” she said. “I come away really amazed at the ravenous quality these kids have for new information. It’s astonishing. It’s a really positive thing for Bennington, and I think people should know about it and feel proud of it.”