Posted on December 8th, by Jack in Articles, Bennington Banner, Writing. No Comments 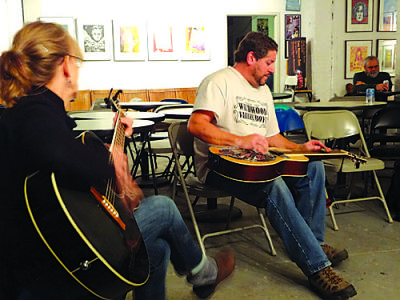 Originally organized after the first Lake Paran Bluegrass Festival in July 2010, the jam has welcomed a rotating lineup of guitarists, fiddle players, bass players, mandolin players, and even some accordion, banjo and dobro players. Group leader and organizer Joe Chirchirillo said he had been trying to organize a recurring jam before, and the festival really helped bring the group together. All types of acoustic instruments are welcome (electric guitars and drums are not, however, as their volume would likely drown out the quieter acoustic players).

Meeting at 7:30 p.m. and often staying until midnight, the friendly group spends the night swapping tunes, learning from each other, honing their skills and talking about all kinds of music — from bluegrass genre to the electric rock and roll of Lou Reed, Bob Dylan or any of the other icons immortalized in the striking prints on the basement walls.

With acoustic guitars, fiddles and mandolins in hand, each month the players come from several towns around Southern Vermont to form a circle in the wide open basement of the mill, a space that houses the VAE’s Basement Music Series concerts.

While the room is outfitted with lights and a small stage, the pickers and fiddlers are only really interested in its ample supply of chairs. As Chirchirillo explains, the monthly bluegrass jam isn’t meant to be a performance, with the spotlight focused on individual accomplishments.

“It’s about playing together” he said. “People act different when they’re not performing. You let your hair down a little bit, to use a cliché. (The jam) is a place where you can relax, and you don’t have to worry about being judged.”

This laid-back, no-pressure attitude permeates every aspect of the monthly jams.

Players are invited to show up with a few songs they want to play in mind, then somebody picks the first tune, briefly tells everyone else how to play it, and away they go. Whoever knows the lyrics sings the verses, and then different players step forward for solos until the tune reaches a natural end. Moving clockwise around the circle, the next person picks a new song to play, and the cycle continues until the makeshift band runs out of songs.

Because every tune contains the opportunity to improvise solos or just strum along in the background, the jam’s loose structure benefits all skill levels. Talented local musicians like Chirchirillo and Tim Blakeney of the Buzzsaw Boys, Ed Ransom of the Ransom Notes and Scott Sanfilippo of the Hale Mountain Pickers regularly treat the group to acrobatic guitar solos, roaring harmonica breaks and impressive mandolin runs, sometimes breaking into exciting back-and-forth battles that will keep the whole group engaged in the same song for 10 minutes or more.

At the same time, there’s plenty of room for beginner and intermediate musicians to build confidence, work on fundamental skills and learn new tunes. The group welcomes newcomers enthusiastically, regardless of skill level.

“People can come if they started yesterday” said Chirchirillo.

“What’s cool about these bluegrass jams is how democratic they are” he continued. “I started playing music very late in life. Until I was 42, I had never touched an instrument. I first went to jams in Manhattan, and there were some very high-level players at these jams. I was intimidated, but I feel like I learned a lot.”

“If you don’t feel like you can participate on the same level as everyone else, you can sit off to the side and strum along and listen and learn some different tunes. I think that’s the best way for a beginner to feel comfortable. If you know three chords and the 1-4-5 (a common chord progression), you can be playing along someone who’s a great player.”

Even though the gathering is billed as a bluegrass jam, the group doesn’t mind mixing in songs from other genres of American acoustic music. Along with classic Bill Monroe compositions and fiddle tunes like the group-favorite “Whiskey Before Breakfast,” they often try out country songs by Hank Williams, selections from the Grateful Dead songbook, some acoustic blues or anything else that fits within the folky confines of the jam’s tastes, skills and instrumentation. For example, highlights of the December jam included a run through B.B. King’s classic blues “The Thrill Is Gone” led by Tim Blakeney and a somber, tender version of Bob Dylan’s “I Shall Be Released,” sung by Julie Shea. The song felt particularly appropriate for the basement jam, as it was originally recorded by Dylan and The Band during their underground sessions that produced “The Basement Tapes.”

Whether you’re a new player looking to improve skills or an accomplished musician who wants to meet new, like-minded people in the area, the VAE bluegrass jams have something for everyone. Most of its core participants play in various bands, so the jams also act as a de facto monthly meeting for those involved with the local music scene, a gathering of the people you might see playing in rock bands at local bars or hosting nearby open mic nights. They’re also some of the county’s biggest music fans, flocking back to the basement for the VAE’s concert series and willing to drive as far as it takes to see concerts or play their own.

In its most basic form, the monthly bluegrass jam is a perfect example of what drives an engaged, energetic local art community. Bennington’s town leaders have recently been talking about ways to re-energize the area’s community of active artists, using tactics like naming downtown a “designated arts district” and creating a plan to attract artistic businesses to the town. While these are certainly constructive ideas, they also shed light on the difficulties involved with trying to create an art scene through the channels available to town government and officials. The jams offer a counter-example of an artistic community that has come together naturally under the guidence of a few passionate individuals.

As a concept, art is far too personal and organic to be affected by official designations and ordinances. The urge to create and express comes from within, and the best way to encourage that artistic impulse is through genuine enthusiasm and support. The greater community can find this encouragement at the VAE and a few other area organizations, just as musicians find it at the jams. Playing in the jams gives you the desire to play music, and play as much and as well as you can. That feeling is what you need to build a local art scene. It’s what makes children of all ages want to explore art. It can start small, but like a seed, it can grow and strengthen as it attracts more interested minds, hands, mandolins, guitars and banjos.

The monthly bluegrass jam is held on the second Tuesday of each month in the basement of the Vermont Arts Exchange on Sage Street in North Bennington. The music starts at 7:30 p.m. and all are welcome to join in with acoustic instruments or just to come as spectators.

Jack McManus can be reached by email at jmcmanus@benningtonbanner.com, on Twitter at @Banner_Arts, or in person at the next jam.