Posted on May 21st, by Jack in Articles, Bennington Banner, Live Reviews. No Comments 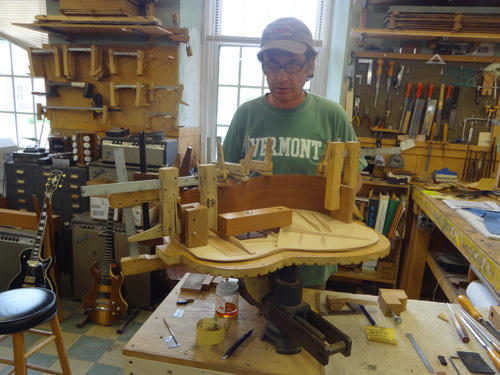 While hobbyist luthiers today can order anything they need online, from very specific (and expensive) tools to ready-made sets of wood shaped and prepared by luthier supply companies, Sauve said he started without any of these luxurious shortcuts.

“When I first started, we were making a lot of our own tools, and we were going to the docks in Brooklyn to buy our wood,” he said.

“I still have boards and boards of rosewood, and most guitar makers who have started since then wouldn’t even know what to do with this,” he continued, reaching for a rough-sawn chunk of precious Indian Rosewood the size of a person’s leg. He explained that most of today’s guitar builders no longer work with raw, unprepared lumber like that, but he knows he’ll be able to turn that wood into the bent sides of five or six acoustic guitars.

“You have to know to handle it,” he said. “I’m lucky the guy I learned from taught me that.”

Now he will pass on the knowledge. Beginning June 2, Sauve will team up with fellow Massachusetts luthier Nick Lenski of Briar Road Guitars to teach a four-week course in guitar building at Massachusetts College of Liberal Arts. Working eight-hour days five days a week, students will build their own acoustic guitars from start to finish. Sauve and Lenski will provide tools and raw materials and take students step by step through their craft.

While Broad fixes historic and unusual instruments, some of which he said he can’t even figure out a name for, and Burrington builds and repairs the heavy-hitting, rock-and-roll machines that come through the shop, Sauve said he mainly focuses his energy on acoustic guitars.

“I never played electric guitar, and they’re certainly more challenging [to build],” he said. “You have to do a lot of carving and bending wood.”

Sauve has also built a strong reputation as a repairman, to the point he said he only has time to build three or four of his own instruments each year. Although he was once Arlo Guthrie’s go-to repairman, he said he isn’t especially interested in catering to high-profile clients — he’s busy enough taking care of Berkshire County’s many musicians.

Bennington’s acoustic and folk music duo, Steve Gillette and Cindy Mangson, said they’ve been loyal Sauve customers for years, and they have great respect for his work.

“He’s a great guitar builder and a terrific guy,” agreed Gillette. “Steve is a genius and someone we trust with the repairs and special voodoo that only someone with years of experience can do. A man’s luthier is a trusted friend. Steve has worked on all our guitars and knows them better than we do.”

Gillette said Sauve’s repairs and modifications to his guitars have helped him move forward in his guitar playing and develop the guitar parts in his songs.

Sauve said he’s attracted to guitars with shorter necks and long bodies, in the style of parlor guitars from the 1920s and 1930s. Many of today’s most popular acoustic guitars are based on designs from this era, and surviving instruments from before World War II are now considered legendary amongst collectors.

Because of the way tonewoods change over time, guitars often sound better as they age. Sauve builds his guitars with meticulous attention to detail, like those prized pre-war instruments, so they can be passed down to future generations, sounding better and better over time.

While some builders have fully embraced the idea of guitars as artwork, covering their instruments with intricate mother of pearl and abalone shell designs, Sauve said he prefers building simple, traditional-looking instruments.

“I’d rather be working on the aspects of the guitar that are going to make it function well and sound good,” he said. “I just want to make a really good guitar.”