Posted on June 18th, by Jack in Articles, Bennington Banner, Writing. No Comments 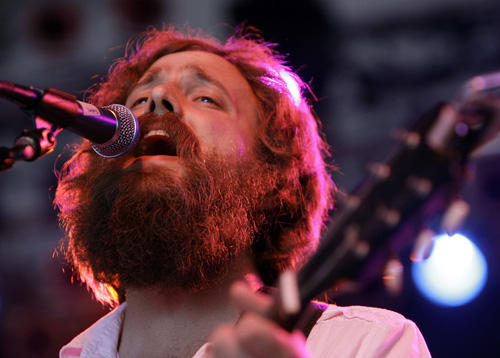 While he remains the lead singer, songwriter and recognizable bearded face of Iron and Wine, Beam often performs live concerts with a hand-picked band of backing musicians, which offers him the opportunity to recreate some of his complex, orchestrated material and add new musical elements to his sparse solo acoustic songs.

After filling Mass MoCA’s Hunter Center stage with a 10-piece mini-orchestra that included horns, percussion and background singers in 2011, Beam said this year’s performance will bring the “five-finger death punch” of himself, “Ghost on Ghost” co-producer Rob Burger, Matt Lux on bass, Joe Adamik on drums and Adamik’s Califone bandmate Jim Becker playing “anything with strings on it.”

Beam also said the show will include a substantial section of him performing solo, as he sometimes does for entire stripped-down shows.

Although he is often known as a solo artist, and many fans recognize his songs best with just vocals and acoustic guitar, Beam said he enjoys the creative challenge of continually re-working the arrangements of his songs, sometimes drastically.

“You can really do anything, as long as you have a melody,” he explained. “You can sing s— a cappella and people will recognize it. You can put anything behind it, and you can play it any way. It’s a very freeing thing as an arranger or as a producer or as a performer.”

Beam said this constant evolution of his live performances also helps him better understand and appreciate the nuances in his songs when he plays them in their original, familiar forms, as he often does during acoustic shows and tours.

Although he has no formal training in music, Beam said the other members of Iron and Wine give him the confidence to try out unexpected new ideas on stage. With several band members coming from a jazz background, songs like “Freedom Hangs Like Heaven” and “Wolves (Song of the Shepherd’s Dog)” sometimes include sections of free, exploratory improvisation or intricate polyrhythmic percussion.

“I don’t play with selfish musicians,” he explained. “At the end of the day, all these people want to make something together that is cool. That’s the goal, and we’re all working together. It’s not an intimidating thing at all.

“It’s an empowering band,” he said. “As a creator, it’s really empowering to have people behind you who can interpret what you’re feeling, always have your back and know the chord changes, but also be able to surprise you. It’s really great. I love my band.”

A graduate of art school, Beam also said he’s looking forward to visiting the museum’s galleries in his free moments before the show.

“They had some great exhibits last time I was there,” he said, “I still have images emblazoned in the back of my skull, which is super cool. It’s great to play music an art museum — I get to do the two things that I love the most in one day.”

Because of their eclectic and selective programming lineup, Mass MoCA’s Associate Curator for Performing Arts Olli Chanoff said it’s rare for a performer to play at the museum more than once, but the last Iron and Wine concert was such a success they’re excited to bring the band back.

“There’s so much going on in indie-folk and indie Americana right now, and [Beam] is someone who has been doing that for a long time. He was something of a trailblazer on that front,” Chanoff said. “He has continued to put out really interesting albums, and he has challenged himself and challenged his audience. He’s somebody who has something to say, and he has an original voice.”