Posted on March 13th, by Jack in Articles, Bennington Banner, Writing. No Comments 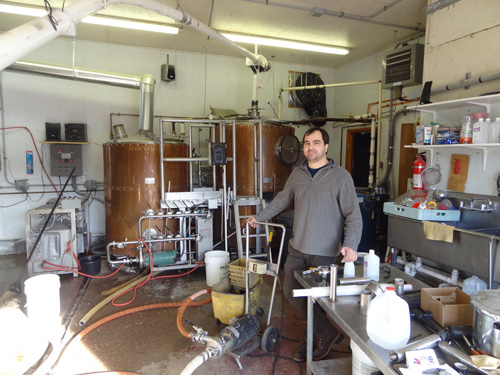 For two years, Chris and Earl gained experience brewing their Equinox Pilsner (a light, crisp Czech-style pale lager) and Battenkill Ale (a stronger, full-bodied English-style brown ale), focusing on the styles that they liked best as brewers and beer drinkers

Mayne said his own taste for craft beer started when he first tried ales by Catamount, a pioneering Vermont brewery.

“When they first opened I was a young beer drinker,” he said, “and I was immediately drawn to local beer. It was my first experience with craft beer, and I really enjoyed it.”

Catamount closed in April 2000 after building a state-of-the-art brewing facility in Windsor. The space is now used by Boston’s Harpoon Brewery, which makes 60 percent of its beer in Vermont.

Over the past few years, Northshire has added a few more beers to their lineup, including their year-round Northshire Chocolate Stout and a hefeweizen during the summer months, which is made with wheat, as well as malted barley. Along with these regular varieties, the brewers have made limited runs with more adventurous flavors, like the 50th Anniversary beer they made for Stratton Mountain, a double brown ale brewed with maple syrup.

Mayne says his experience as a homebrewer helped spark his creativity in trying out new styles and flavors.

After brewing at home and in his spare time, Mayne and his wife are now committed full-time to brewing beer and running Northshire, and they intend to keep experimenting with new tastes as their business grows.

Mayne said they brew beer with “ingredients that are true to the style,” using malts from Germany in the pilsner and hops from England in the Battenkill Ale.

Thanks in part to a recent program at the University of Vermont, many local farmers have started growing hops to feed the state’s bustling craft beer industry, including Hoppy Valley Farms in Pownal and several other farms in Shaftsbury. For Northshire, this growing source of local ingredients came at the perfect time.

“We harvested some cascade hops in Shaftsbury last year that we’re getting ready to make into a beer called Local Hops and Honey,” Mayne said, explaining that they also found a local source of honey. They have planned this brew for this May, and he said he only expects to make one batch to bottle and sell at the brewery.

Along with trying out new varieties, Northshire is looking to expand their business, in brewing capacity and their ability to accommodate visitors. Right now Northshire’s beers are made in batches of 14 barrels, or 430 gallons, at a time, but Mayne said they’re constantly expanding to keep up with demand. They’re also expanding their facilities at the brewery to include a tasting room, which will open this spring for visitors.

The brewery also offers tours of their facility on Saturdays; appointments can be made through the brewery’s website at northshirebrewery.com.

Lani DePonte, manager of Ramunto’s, says they have served Northshire beers since they opened about three years ago, with the Northshire Chocolate Stout currently on tap. Stouts may not be a beer usually paired with pizza, but DePonte said it’s still popular choice.

“It’s a little dark,” she said, “but it’s popular with tourists coming through town.”

Northshire’s beers are available in bottles at many beverage centers as well as at Hannaford’s in Bennington, and on draft at Kevin’s in North Bennington and The Publyk House and Ramunto’s in Bennington.