Posted on September 5th, by Jack in Articles, Bennington Banner, Writing. No Comments 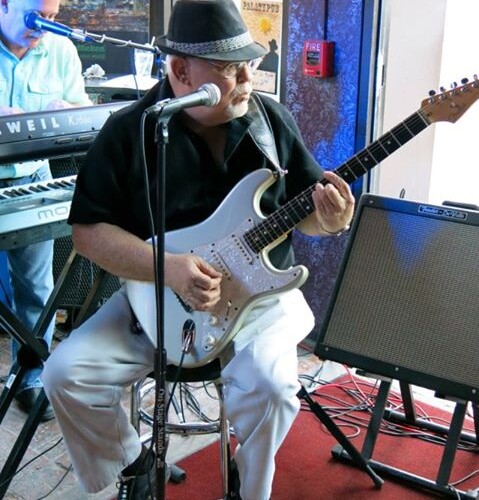 Born in Bennington in 1950, Eric “Rick” Burgess attended Saint Francis de Sales Academy, Bennington Catholic High School, and Mount Anthony Union High School, graduating in 1968. A lifelong lover of music, Burgess became a member of the local band Pure Lard in 1969, quickly building a reputation and even performing in concert with legendary groups like The Byrds and The Guess Who.

In an interview on August 7, 2014, Burgess explained that his lifelong love of the blues started when a Pure Lard bandmate introduced him to the music of B.B. King.

“Right off the bat, the emotion and feeling that he played with really touched me,” said Burgess.

He would continue to play guitar, harmonica and sing the blues for the rest of his life, earning a place in the Blues Hall of Fame along with his band, Blues Sanctuary. With his deep, gritty voice, Burgess had a unique talent for tapping into the rich history of American blues music, as well as for connecting with audiences.

“My parents had foster kids all throughout my early adolescence. Fred Chandler was the very first foster kid we ever had, and Rick was one of Fred’s best friends,” said Jim Carroll of Bennington, who said he first met Burgess as a 12-year-old. “All the two of them ever wanted to do was play music, and they were so good.”

“He was far more than a bandmate for me,” said Pallman, who plays drums in Blues Sanctuary. “Rick was my confidant, he was my mentor, my advisor, my golf buddy, my musical partner, the godfather of my daughter, my spiritual advisor, and truly my best friend.”

Burgess was also blessed with a great passion and talent for helping others, working with the residents and veterans at Bennington Health and Rehab and the Vermont Veterans’ Home.

“He wasn’t just there working and doing his job — he was there caring for those residents,” Pallman said. “There wasn’t anybody that he didn’t take the time to get to know and care about.”

His passions for music and helping people often intersected, as he frequently signed up the band to play benefit concerts.

“We would go play concerts for the Veterans’ Home, without anybody even knowing we were doing them. Rick would book these shows, and we wouldn’t get paid for them, but those gigs were great,” said Pallman. “The veterans were probably one of the best audiences we ever had, it was such a pleasure to play for them. Whatever it took to help his fellow man, Rick was there.”

“He had a heart of gold,” said Doug Crossman of Shaftsbury, one of Burgess’ longtime friends. ‘A great father, great grandfather, and just great to everybody. He was always smiling, never saw him mad at anybody and I never heard him say a bad word about anybody. He was just always there for whoever needed him. He was an amazing man.”

“Whenever the phrase ‘larger than life’ is spoken, I will always remember Rick as one of those people,” added Jim Carroll. “There was no pretense about him. He was just a really good, good guy.”

After word spread of his passing, members of the Bennington community flocked to the Blues Sanctuary Facebook page, bonding together over photos, stories, and kind words thanking Burgess for his years of friendship, music and kindness.

“When you played the blues, you took away ours. Thanks for that incredible gift” said one commenter, under the online pseudonym Ethan Allen.

Burgess is survived by Michele, his wife of 38 years, their three children and six grandchildren.

His friends also describe him as a devout Christian, describing his relationship with God as “second to none.”

Burgess’ bandmates in Blues Sanctuary will be performing in his honor this evening at 6 p.m. on the front porch of the town offices on South Street in Bennington. Pallman says the band will be happy to collect any donations to the family at the performance.

When asked to explain put their feelings about Burgess for this article, many of his friends explained how hard it was for them to capture his immense personality and spirit in words. Although he too expressed some hesitation, Doug Crossman put it most simply.

“Heart of gold,” he said. “That’s all there is to Ricky Burgess. Heart of Gold.”