Posted on June 11th, by Jack in Articles, Bennington Banner, Writing. No Comments 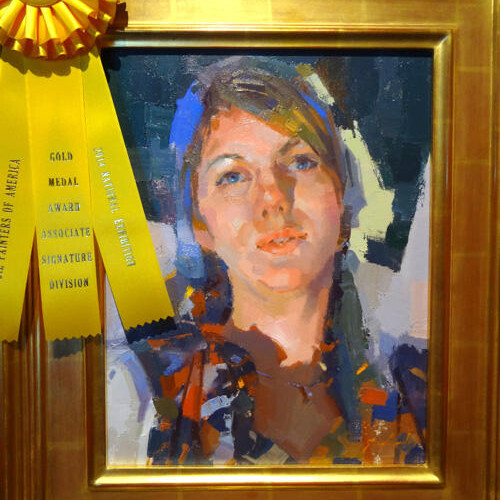 This year marks the Oil Painters of America’s 23rd National Juried Exhibition of Traditional Oils. The national show is its largest event of the year: OPA President Neil Patterson estimates about 2,500 to 2,700 of the organization’s members submitted their top works of the year, hoping to have a place in this year’s national show. Of these many submissions, the jury selected only about 200.

Because being selected is such an honor, OPA master painter and board member John Michael Carter said most of the selected artists usually travel to the exhibition opening.

“There are quite a number of people who make an effort to enter this show, and it’s quite a feather in their cap if they can get in,” Carter said. “People will save their best work to try to get into this exhibition, and if they’re in, they will try to make it up to Bennington to be there when it opens and take part.”

Along with the 200 paintings selected by the five-member jury for the show, the OPA’s master members (who must pass a strict jurying process to earn that distinction) are invited to submit works to the show. Of the group’s 3,600 members, only about 40 have achieved master status. Twenty-eight of the masters have submitted paintings this year, including Carter, Alan Wolton and Zhiwei Tu. These latter two masters also held painting demonstrations over the weekend.

Known for his large paintings, Alan Wolton’s 60-by-80-inch work, “One Million and One Aspens,” was one of the largest in this year’s show, and Zhiwei Tu, a celebrated Chinese artist, has an entire museum in Shiaoguan City, China, that exclusively displays his work.

The Oil Painters of America started as an organization in 1991 to promote and preserve traditional styles of representational painting. At the time, Patterson said, popular tastes were shifting away from traditional art forms and museums started showing more “off-the-wall things and very modern art and abstracted art,” a trend that prompted oil painter Shirl Smithson to found the organization in hopes of protecting the future of traditional painting styles.

The OPA has continued this mission with educational programs for its members and with it’s exhibitions, which are open only to representational paintings.

“A painting can range from very realistic to impressionistic, but it has to represent something. There’s no abstract art whatsoever,” Patterson said.

“Some subjects will be classical realism, almost photorealism, and others will be quite impressionistic. It’s just an interpretation of real subject matter,” Carter added.

The show has also earned a reputation among art collectors, who know that OPA member artists save their best works to submit to the national show.

“Collectors now know about Oil Painters of America,” said Patterson, “so they’ll come to the show and pick the best of the best.”

“If you come and look at the show, think about how many hours of painting goes into the 200-plus paintings,” he said. “It would be incredible to tally up. It’s not something you can do in an hour. And it’s little pay for all the work that goes into the painting.”