Posted on April 16th, by Jack in Articles, Bennington Banner, Writing. No Comments 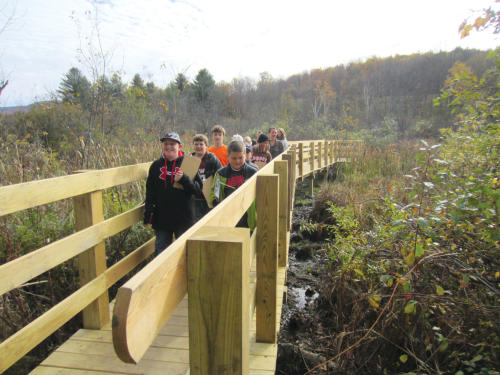 At 6:30 p.m. on Earth Day, forester Jim Esden of Vermont’s Forest Resource Protection program will give a presentation on the emerald ash borer, an invasive exotic insect that has killed millions of ash trees across North America since it was first detected here in 2002.

Although the ash borer has yet to invade Vermont, the week following Earth Day and Arbor Day has been named Ash Tree Awareness Week to celebrate Vermont’s 150 million ash trees and spread awareness about the invading insects.

“Ash trees are really a lovely, lovely tree, and the ash borers are coming north,” said Mary Fuqua, the president of One World’s board of directors.

“They’re all around us at the moment,” Loyd-Pain explained.

The ash borer has been found in Massachusetts, New York, New Hampshire, across Quebec and elsewhere around North America, but has not shown signs in Vermont.

“They’re surrounding us,” Loyd-Pain said, although she admits we have been “very lucky” so far in avoiding the invasion.

“So much depends on volunteer efforts” she explained. “We’re training people to spot the signs of the ash borer, because they’re little, tiny, pretty green insects, and if more volunteers know the signs, maybe we can prevent them from spreading.”

The Earth and Arbor day festivities will continue at One World with an event at 7 p.m. on April 24 to talk about volunteering in the One World Conservation Center Corps. Volunteers can help the center by assisting at events and educational programs, helping monitor the trails around the Greenberg Reserve, pulling invasive plants, helping with mailings and more helpful tasks for volunteers with various abilities, interests and available time.

One World will also join an effort to protect certain wildflowers, including red trilliums, jacks-in-the-pulpit, bloodroot and more.

“There’s a Vermont-wide project to track when they bloom, and we began participating in that last year,” Fuqua said. “We took a crew out on the Greenberg Reserve and found four of the 10 plants they’re monitoring, photographed them and sent in the data, and we’ll do the same this year.”

One World has two of these wildflower excursions planned, at 1 p.m. on April 26 and May 10.

Visitors can also explore the the Greenberg Reserve across the street from headquarters. Once a dairy farm, Fuqua said, the land is now a peaceful and vibrant nature reserve. The woods have been growing back since the mid-1900s.

One World maintains a network of trails and bridges through meadows, wetlands and woodlands. Fuqua and Loyd-Pain said they have seen signs of bears, coyotes, beavers, otters, mink, frogs, fish and rare birds, like the woodcock and ruffed grouse.

To help these species thrive, One World has teamed with the Southwest Vermont Career Development Center’s Forestry program to help clear the land around a patch of apple trees in the reserve, which will help them grow and provide food for the animals.

“It really is a pretty good piece of our earth,” Fuqua said.