Posted on July 22nd, by Jack in Bennington Banner, Writing. No Comments 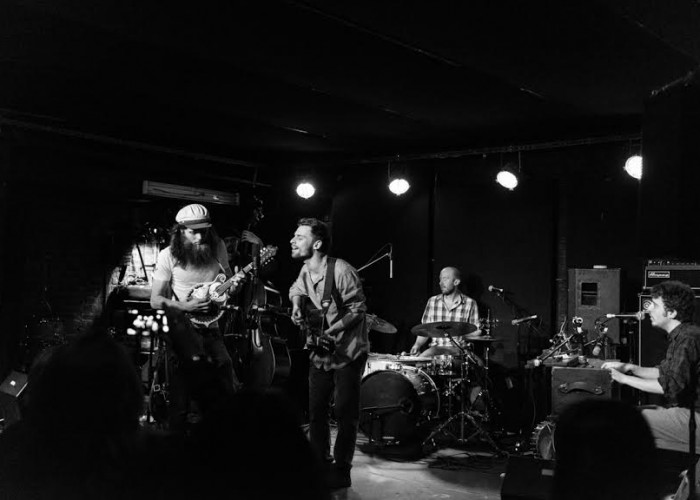 Before Phox brings their elegant vocal pop sound to the Basement stage on Saturday, Parsonsfield will kick off the weekend with their passionate 21st century brand of American roots music on Friday, sharing the stage (and a mutual love for high-energy traditional twang) with Vermont’s own Gold Town, who will open the show.

Doug Hacker of Billsville House Concerts says that he orchestrated the back-to-back shows to contrast each other musically.

“We wanted to do two nights that are really different,” he said. “They’re both excellent bands, but Friday will be more of a roots music, bluegrass, Americana thing, and Phox on Saturday will be something totally different. I hate to throw labels around, but they’re more jazzy and folky.”

After changing their name this summer from Poor Old Shine, a phrase they borrowed from the folk song “Ain’t No More Cane,” Parsonsfield has grown from its accidental beginnings as a band into rising stars on the contemporary folk music scene.

Guitarist and Pump Organ player Max Shakun explained that the band started when banjo player Chris Freeman and mandolin player Antonio Alcorn joined the University of Connecticut Folk Music club together, and their club was mistaken for a band.

“They got billed for a show at Toad’s Place in New Haven, which is a pretty big venue,” he said. “The two of them were so excited that they were mistaken to be a band that they said ‘Why not? Let’s pull together a few songs and play it.'”

Shakun knew Freeman from their college a cappella group, and they also invited Harrison Goodale, who was studying classical bass at UConn, to join the band.

“(Goodale) likes any type of music, and he’s totally happy to play anything,” said Shakun, explaining that the members all have different musical backgrounds. He said that he learned about traditional folk music through Jerry Garcia’s acoustic recordings and his Deadhead father, and the other band members were also exposed to folk music when they were growing up.

After cycling through a two percussionists before him, Parsonsfield locked in their current lineup when they were recording their formerly self-titled album, “Poor Old Shine,” at the Great North Sound Society recording studio in Parsonsfield, Maine. Shakun explained that they invited drummer Eric Hischmann to play on the album as a session musician, and he fit so well that they invited him to join the band full time after the recordings were finished, and then they they chose their new name to thank the birthplace of the band they have become.

“We recorded (the album) in a retreat style, where we lived in an old farmhouse for about a week and a half,” Shakun said. “We definitely evolved as a band from that, and I guess we evolved into Parsonsfield.”

Thanks to acts like the Avett Brothers and Old Crow Medicine Show, modernized American roots music has reached a new level of popularity over the last few years. As a young band on the scene, Hacker said, Parsonsfield stands out because of their youthful energy and passion.

“They’re very good technically, but there are lots of band that are really good technically in the bluegrass vein,” Hacker said. “What Parsonsfield brings is an exuberance and energy that really pushes them over the edge.”

For those new to Parsonsfield, Hacker recommends their songs “Weeds and Wildflowers” and “Right Now,” two uptempo tunes that match the folky instrumental sounds with a driving rock feel, thanks to Hischmann’s animated drumming.

At this weekend’s Parsonsfield and Phox concerts, Vermont native Matt Sargent will also bring his Phantom Food Truck, which travels to concerts around the state serving carefully crafted meals like Vermont pulled pork sandwiches with grilled apricot, flank steak and lettuce cups and watermelon-arugula-feta salads. The parking lot will open at 5 p.m. before the 8 p.m. shows to allow time for dinner at the food truck.