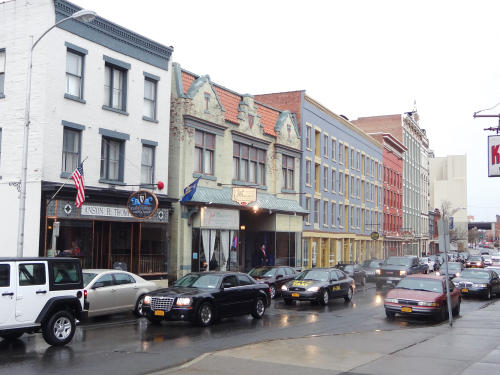 Before it became a popular regional brand, Brown’s Brewing Co. started out as a brew pub on River Street in Troy, and although most of its brewing operations have moved to a larger facility on the Walloomsac River in North Hoosick, N.Y., the Brown’s Taproom at 417 River St. still draws serious and casual beer lovers.

The taproom offers 12 Brown’s varieties on tap, and while dark-colored beers, like their stouts, porters and black lager, make up a sizeable chunk of the menu, the staff at Brown’s enjoy introducing new styles to the craft beer uninitiated.

Cody says she often recommends their brown ale to customers who ask for Budweiser, because it has a crisp, drinkable flavor despite its deep caramel color.

Beers are available in pints, tasting flights of six or eight beers at a time, cases and six-packs of bottles and even two-liter growlers to take home. The recently opened, semi-secret basement Malt Room also features three unfiltered, cask-conditioned beers, 30 scotches and 20 bourbons in an old-fashioned setting — without TVs or flavored vodka.

Decked out with string lights, sombreros and Irish pub-style decorative mirrors on the walls, José Malone’s is the brainchild of local restaurant veteran Ray Wall, who opened the space after years of perfecting his margarita recipe (which trades in fresh-squeezed lime juice for sour mix) at the Albany mainstay, El Loco Mexican Cafe.

Combining his Mexican food experience and background as a traditional Irish musician, Wall quickly discovered a long history of Mexican-Irish cultural interaction when he first started the restaurant. Along with a missionary history, Wall said he was surprised to discover the story of Los San Patricios, a battalion of Irishmen who defected from the mostly Protestant American army to the Mexican side — made up of fellow Catholics — during the Mexican-American War.

“People don’t realize this, but potatoes are a new-world food,” he said. “People think ‘Oh Mexican-Irish, that’s so weird,’ but where do you think potatoes came from? They’re not Irish.”

Wall nods to the potato’s American origins with his restaurant’s chipotle mashed potato quesadilla, one of several fusion dishes on the menu. Wall says the corned beef and cabbage quesadilla is also very popular.

Although Dinosaur Bar-B-Que established its first location in Syracuse, the upstate New York mainstay has Capital Region roots — its founders started smoking their delicious meat feasts at the annual Harley Rendezvous in Pattersonville, N.Y., about 25 miles from Troy.

More than two decades after opening their first restaurant, Dino brought its famous ribs, wings and brisket back to the Capitol Region in 2010 with its Troy location at 377 River St., which sits right on the bank of the Hudson in the shadow of the Green Island Bridge.

Of course, there is much more to Troy than simply eating and drinking. The beautiful Troy Saving Bank Music Hall brings classical, rock, folk and other performances for music fans, and open-minded art enthusiasts will love the Experimental Media and Performing Arts Center (EMPAC) at the Rensselaer Polytechnic Institute, which attracts cutting-edge artists and thinkers to perform and speak on a regular basis. There’s always more to discover, and with Albany and Schenectady nearby, Troy is a fantastic place to start, end or spend a day exploring.