Posted on September 17th, by Jack in Articles, Bennington Banner, Writing. No Comments 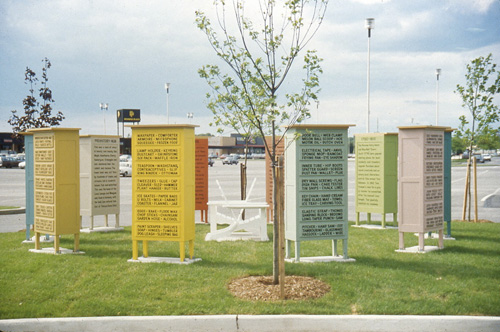 “I built a piece, which has become one of my favorite pieces, called ‘A Powerhouse for Adam Smith,'” she said. “After I built the piece in Bennington, I built a simultaneously existing double at the New Museum in New York, so there was a piece in nature and a piece in culture. That had a lot to do with the dialogue that I was trying to establish by making the pieces to begin with.”

Ewing explained that the piece, a black building large enough to enter with text on the outside and a faux silk spinning machine on the inside, was based on the early history of the silk spinning history in Vermont.

It follows her interest in creating polyvocal works, she said — works which speak in several voices at once.

“With ‘Powerhouse for Adam Smith,’ you’re driving along a road and you look off the road and see a building. It’s a building that you recognize, but it’s an archetype of a building — you know it’s not a real factory,” she said. “You know it’s making reference to a factory. So it has image, it has text, it makes reference. The polyvocality is using image, scale, historical reference, text, and then having something operational inside of it, which this piece had.”

In creating her installations, Ewing said, she tries to make artwork that viewers can actively experience and immerse themselves in, intellectually and physically.

She often approaches her artwork with the goal of provoking thought from her viewers, she said, although the thought itself depends on the viewer’s own experiences rather than a premeditated message that Ewing is trying to purposely communicate.

“In all of my work, you’re looking at things you can see in the world and they’re being re-presented to you in a new context to get you, as the viewer, to think about them again,” she said.

This theory is especially apparent in works like “Subject/ Object Memory,” an arrangement of cabinets placed in a retail center parking lot in Pennsylvania, each covered with text listing modern items that the drawers might contain (hammer, chop sticks, wallet, electrical tape, eye shadow, etc.) on the front and descriptions of pre-modern life on the back. Another example is “The Library: A Device For Storing The Winds Of The World,” a small-scale neo-classical building (also painted black) installed on the Skidmore University campus in Saratoga Springs, N.Y.

“When I was building ‘The Library,’ a little girl came up to me and she was probably about 4 years old, and she put her hands on her hips and said ‘Is this the government?’,” said Ewing. “It was because that form — that architectural type — has been used in so many official buildings in the United States and actually around the Western world. For me, it was a fabulous question, because I knew that it brought something up in her mind and memory.”

At Bennington, Ewing will also be speaking to Jon Isherwood’s class on Art in the Public Realm, a subject she is quite familiar with after creating many pieces outdoors, on campuses, in cities, and even inside Chase Manhattan Bank in New York.

“Part of the engagement of public art is to have your work in public places so people don’t have to leave the ordinary sphere of their daily activities and go into a museum,” she said. “Public art wants to go out into the public and be part of the ambient environment.”

“I invited her specifically for how she navigates this dynamic between imagery that is recognizable and an overlay of political or social implications” Isherwood said. “The range of work that she does is very appropriate to students at Bennington, and the social and politically engaged dynamic really fits with some of the students focus up here.”