Posted on June 25th, by Jack in Articles, Bennington Banner, Writing. No Comments 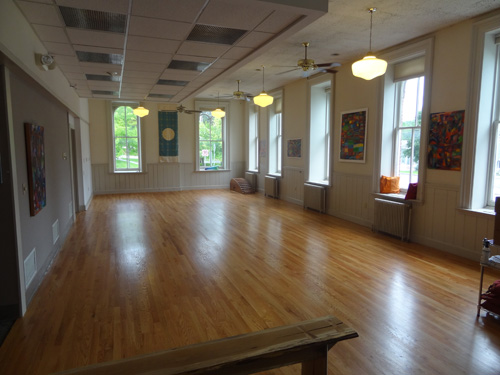 Rechristened the Left Bank, a reference to the famously artistic neighborhood in Paris as well as the business that left the building in November, the former Merchant’s Bank building at 5 Bank Street was renovated over the winter and has now re-opened as a multi-use community facility. So far the Left Bank has been hosting yoga classes, concerts, ukulele gatherings, hula hoop workshops, readings and other events and classes, most of which are free and open to the public.

Built in 1864, the building operated as a bank for just shy of 150 years before Merchant’s Bank donated the building to the Preservation Trust of Vermont and the Fund for North Bennington, a non-profit organization responsible for building community in the village and maintaining more than 400 acres of trails and open land around North Bennington.

Board of trustees member Christine Graham said that the Fund had never owned a building before, but when Merchant’s Bank agreed to donate the building they lept at the opportunity. Some parts of the building have been rented as office space to keep it from becoming a financial burden, but the most prominent rooms were renovated for community use, like the bank’s former lobby, which now hosts events and wellness classes.

“We opened the space up and made it really light and airy, and that floor is good for doing all kinds of activities, like dancing or yoga,” Graham said. “It was all filled with old-fashioned dark wood teller’s booths.

Originally we thought they were historic, and we were going to save all the wood, but they turned out to be plywood with veneer on them, probably from the ‘60s or ‘70s. So we ended up just tearing those things out.”

Amy Anselmo, the assistant manager of the building, said the lobby has been most active with yoga classes so far.

“It just became a yoga studio. That wasn’t specifically the plan,” she said. “It was very natural, and that’s why it’s working so well. We have about six classes a week, and they’re really well attended. There are a lot of people coming to these classes from Shaftsbury and North Bennington. It’s convenient for them.”

Anselmo said she’s currently looking for more kids’ programs, and she hopes to start hosting slacklining and karate classes over the summer and fall. Last week the Left Bank hosted Shirley Jackson Day, a reading and celebration of the former North Bennington resident who wrote the famous short story “The Lottery.”

They also held a performance by local band The Three Graces, and in May they hosted a release party for The Silo, Bennington College’s undergraduate literary journal.

“It was so nice — there were a bunch of students sitting on the floor and pillows everywhere, listening to readings and poetry and live music,” Anselmo said. “More of that college and town collaboration would be great. The college really wants that, and this is a lovely space for it.”

The Left Bank plans an art opening for Pam Carey, whose colorful paintings are currently on display in the lobby. Anselmo said they’re hoping to host a Beatles-themed open mic at the event in honor of Carey’s favorite band.

Beyond the lobby, the old employee kitchen now houses a massage table, the vault is used for storage and some of the other rooms are available for the community to use as they wish. Community members are invited to use the space free if they’re hosting events with free admission.

Energized by their strong start this spring, Graham and Anselmo both said they’re excited for the future of the Left Bank.

“I think over the years it will evolve into whatever it is that the community wants at that time,” Graham said. “If this was 15 years ago, probably nobody would have wanted a yoga class. Right now, yoga is so popular that we have six or seven classes a week, and they’re all popular. 15 years from now, who know what we’ll be doing there.”