Posted on April 1st, by Jack in Articles, Bennington Banner, Writing. No Comments 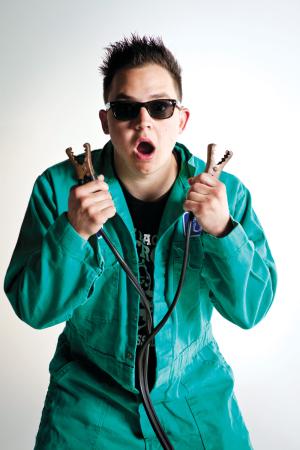 With groups coming from Brattleboro, Burlington, Rochester, Boston and other surrounding areas, Melissa Kate Adams, who is hard of hearing herself, says the event will emphasize the strength and power of the tight-knit deaf community.

“I’m looking forward to seeing a lot of people gain awareness about deaf culture and deaf community and how much we can get together no matter how far apart we are,” she said.

Called Eyes Wide Open, the panel will start at 4:30 p.m. and bring together several deaf adults who have found happiness and achieved lifelong goals: Adams; Adam Silva, an IT worker who homeschools his four children; Kathy Velon, who will share her experiences with raising both a hearing and a deaf child as a deaf mother; and local student Chris Branagan.

Forbes will also join in the panel discussion, answering questions about his career in music before performing with his band at 6:30 p.m.

Growing up in a musical family in the Detroit — the famous home of Motown — Forbes was inspired to start playing the drums at 5 years old, even though he lost his hearing as an infant.

“When I first heard that pounding kick drum that opens up the famous song ‘Devil With A Blue Dress’ by Mitch Ryder and The Detroit Wheels, I knew that I had to do that” Forbes said in an email. “Once my parents saw that I could follow the rhythm of music they knew that drumming was in my future.”

This attraction to rhythm helped Forbes, a self-described “rock and roll baby,” discover hip-hop in the ‘90s.

“The sounds of Snoop Dogg, Dr. Dre, NWA, just spoke to me,” he said. “It was probably the g-funk style of their songs that drew me in, but what they were doing vocally with cadences and flows was really interesting to me.”

“When I first heard rap,” he said, “there was something about the way that the vocals were coming out that made me feel like it was ‘drumming with your mouth,’ and I was hooked.”

Forbes released his debut album, “Perfect Imperfection,” in 2012, recording 14 songs about his personal experiences being deaf (“I’m Deaf,” “Watch These Hands”), a few lighthearted, relationship-focused tracks (“Crazy About You,” “Let’s Mambo”), and a tribute to Bob Dylan. The album ends with a strong statement, an inspirational track called “Don’t Let Anyone Hold You Back” that condemns prejudice and urges listeners to embrace their potential.

This motivational message is a key aspect of Forbes’ music, as he uses his own success as an example of how anyone can achieve their goals with the right attitude.

“If a deaf kid can make a living in the music business, an oxymoron of a business to go into,” he said, “then what is stopping you from chasing your dream?”

Forbes has also made several music videos for his songs, incorporating American Sign Language and written lyrics into the visuals so all of his fans can follow the stories and messages in his songs. While he enjoys making the videos, he said, he likes performing live concerts even more.

“I’ve often had people tell me that they’ve seen my videos, but it doesn’t compare to seeing me live,” he said. “You actually see me in my element. When you make a video you can cut away from the shot, but when you’re live on that stage you have nowhere to go but to own that stage and put on a captivating show.”