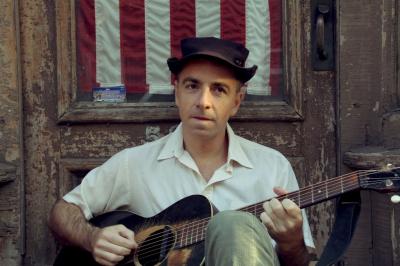 Living up to his reputation for musical curiosity and genre exploration, Fishman has established a tradition of arriving each year in North Bennington with a new lineup of bandmates, including other Basement Music Series alums like violinist Mazz Swift, who has performed at the VAE in three different groups over the years.

“I have a collective of musicians down here in New York, a lot of whom play with much bigger names than me,” he said in a phone interview. “It just depends on who’s available and what feels like a good lineup when I think about the kinds of things I want to do within a show.”

Along with his own solo and accompanied shows, Fishman is known for performing in the context of many different special projects, many of which have their own bands. These include The Biting Fish Brass Band, his New Orleans-style brass band project; The Howard Fishman Quartet, which plays early jazz, blues and standards; Monkey Farm, his electric indie rock guise and several other projects focused around the music of Hoagy Charmichael, Bob Dylan’s “Basement Tapes” and more. He is currently engaged in a project reviving the songs of obscure singer-songwriter Connie Converse. Fishman explained that Converse “disappeared in the ’70s after never really making it, but she left behind these amazing, beautiful recordings.” Also a veteran dramatist, Fishman says he’s also working on a theater project focused on her life.

While audiences in his home city of New York have followed Fishman as he moves between these various projects, he says he enjoys the opportunity to just be himself when he comes up to Vermont.

“One of the things that I like about playing in Bennington is I never have to come up there with a specific project in order for people to come and hear me,” he said. “I don’t think I’ve ever done anything other than a Howard Fishman show up there.”

Instead of playing one particular style or body of songs, Fishman says he takes a “chef’s choice” approach in his Vermont shows, playing a mix of songs from his various projects and interests.

“I really appreciate that the audience allows me to do that,” he said. “I appreciate that kind of trust and loyalty, because I feel like we might take some chances up there that we might not in other places, in terms of trying out new material or new arrangements, or debuting new songs.”

Fishman also says that he values the welcome he always gets from the Bennington audience. “It feels like everybody knows each other up there,” he said. “Me and my bandmates always feel like we’re being welcomed into a community in a very warm way. It makes it a very special experience.”

In our current age of global communication, Fishman says the common, shared experiences of concerts like his are crucial in maintaining the connections and relationships that shape our local communities.

“I feel like it’s really important for people to be in a room together in the same moment, in a present moment,” he said. “It’s important to perform and to perform well, but I feel like my greater purpose these days is to help people break out of the isolation that we all feel, in terms of just having relationships with glowing screens that can be stronger than the relationships we have with real people.”

“Bennington is a great example of that,” he continued, “because I always feel that a sense of community really is fostered and created. I love it for that reason.”

If you’re interested in sharing a present moment with Howard Fishman and his band, his performance starts at 8 p.m. tomorrow night, March 28, in the basement of the Vermont Arts Exchange at 29 Sage St. in North Bennington. Tickets will be available for $26 at the door ($15 for students).