Posted on July 30th, by Jack in Articles, Bennington Banner, Writing. No Comments 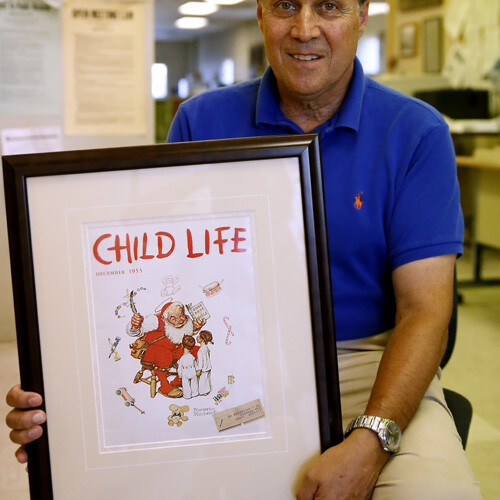 Deana Mallory, the museum’s director of public and education programs, said the museum is excited Mary Doyle Keefe, the model for Rockwell’s original painting of “Rosie the Riveter,” plans to attend the reunion.

The event will also give a preview of Matthew Miele’s upcoming film, “Our Neighbor Norman,” based on a book by Rockwell model Buddy Edgerton about his relationship with the artist. Rockwell lived next door to the Edgerton family for 10 of the 14 years that he lived in Arlington, and Buddy modeled for several paintings in that time.

After organizing the first two Arlington Rockwell Models Reunions in 2010 and 2012, Don Trachte said he and his fellow models appreciate the opportunity to reflect on their place in American art history.

“At the time, we took our five dollars and walked away. That was it,” he explained. “It is only in the last 10, 15 or 20 years that we’ve taken some pride in it and realized that it’s a special thing.”

Trachte modeled for a 1953 “Child’s Life” cover that showed him and fellow Arlington model Melinda Pelham meeting Santa Claus. The image has since been licensed to Hallmark for Christmas cards, and he says he loves seeing reissues of the card every few years. Although he was only about 5 years old, Trachte said, he still remembers sitting for Rockwell.

“Jenny McKie was another favorite model of Rockwell’s, and she was also my babysitter,” he said. “I remember her taking me by the hand and saying, ‘You need to get into your pajamas right now!’ I think I was so embarrassed because not only was I in my pajamas, but I was holding hands with a little girl. At that age, that was quite a feat for a boy.”

Other models have similar stories about their experiences, and many have photographs of themselves modeling for Rockwell. These images and stories offer an interesting behind-the-scenes look at the way Rockwell worked.

“He was like a movie director — you couldn’t just sit there. You had to sit the certain way that he wanted you to sit,” Trachte said. “He would prop you up and put books under the heels of your feet to get the proper angle — we even have pictures of the model Don Hubert with his legs taped to the chair legs.”

Rockwell’s paintings captured a wonderful time in the lives of all his models, Trachte said, and he appreciates that his childhood has been preserved by such an acclaimed artist.

“Arlington in those days is mischaracterized by some critics, who say a place like Arlington never existed. Well it did exist, and these were great, fun people,” he said. “Everyone in Arlington has great pride in Rockwell, and we have great pride that we lived there during that period. We have such admiration for his genius as an artist, and right now, with all the sales of his paintings, he is probably noted as America’s foremost painter.”

“Of course, we all think he did some of his finest works here in Arlington,” he added.

All of the day’s reunion events are open for museum visitors to join in, and, as part of Bennington’s Arts Weekend, the museum will celebrate the event by offering free admission to all Bennington County residents.

“That includes Arlington, where these folks grew up and lived, and my many of them still do,” Mallory said. “It’s an opportunity for us to meet these people whose faces are so much a part of our emotional landscape.”

While the museum does not own any of Rockwell’s paintings, it has hosted locally focused exhibits in the past that have included Rockwell.

“Part of our mission is celebrating the art, creativity and history of this entire region,” Mallory said, “and that certainly includes the years that Rockwell spent here.”