Posted on March 11th, by Jack in Articles, Bennington Banner, Writing. No Comments 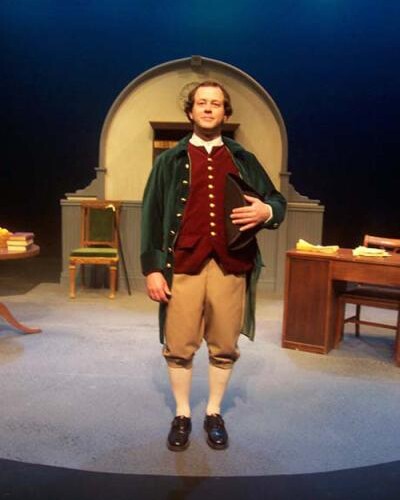 Peterson, who also serves as Oldcastle’s producing artistic director, discovered this quirk in one of the many books and biographies that he used for research. In fact, he says there’s far too much interesting information about Franklin to cover in a play of reasonable length — from his diplomacy to his scientific discoveries to his freewheeling personal life.

“What fascinates me about him most is that he was a renaissance man,” said Peterson. “He was a great scientist, and a fabulous writer, a diplomat, a politician, and he always described himself as a printer. He did so many things well. Our politicians aren’t able to do that anymore.”

New York actor Patrick Ellison Shea will perform the one-man show, running through the weekend. Shea, an Oldcastle regular, most recently performed in last summer’s production of “The Fox on The Fairway.”

“This is my 20th anniversary of working with Oldcastle — my first show was back in 1994,” he said, “so it’s terrific to be invited back for another go-around.”

Shea first appeared as Ben Franklin during the show’s first Oldcastle run in 2007. At the time, it was Shea’s first experience performing a one-man show.

“Doing a one-man show can be daunting if you’ve never done it before,” he said. “It was an exhausting experience just trying to jam all the facts and lines into my head. It has been a much easier journey this time.”

Oldcastle has changed locations since the last time the show was performed, and Peterson says he’s excited to bring it into their new performance space on Main Street.

For the setting of the play, Peterson said he chose to show Franklin in his home, speaking “as if he’s chatting with a close friend and telling about what his life has been like.”

Shea appears as a middle-aged Franklin, although his character is aware of the accomplishments and experiences from his entire life.

Along with the three-night run for public audiences, Shea will also perform for history and literature students at nearby colleges and high schools, including Mount Anthony Union High School.

Shea says he’s looking forward to “telling some of the less familiar stories” from Franklin’s life, especially of his accomplishments from his life before politics.

“We picture him as this elder statesman, but he did a lot of stuff before that,” She said. “He was a newspaper editor in his 20s. He had accomplished a lot of things as a young man that people would aspire to today.”

He also said the show portrays Franklin realistically, not just the way he is remembered in popular culture.

“He was a bit of a troublemaker,” Shea explained. “He got into trouble at various times in his life by speaking out against certain topics. He was very outspoken. He had his opponents, and he had his enemies.”

“He had a very difficult relationship with his son, who remained pro-British, and that was extremely hard for him both politically and personally,” Peterson said. “He became a very good grandfather, after not having been a very good parent. He was a very absent parent.”

After writing the play and tweaking the script to read more naturally for this run of shows, Peterson says he likes to compare Franklin and his contemporaries to today’s politicians.