Posted on July 2nd, by Jack in Articles, Bennington Banner, Writing. No Comments 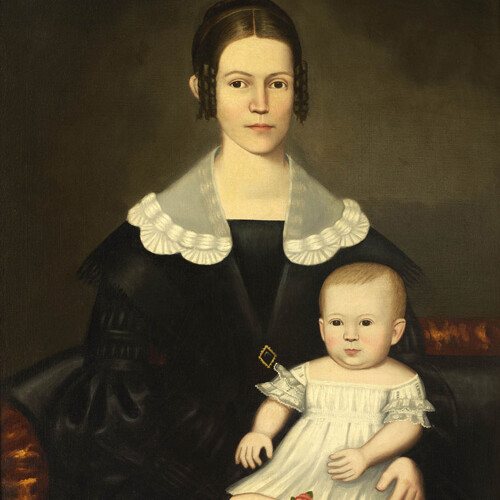 Museum director Robert Wolterstorff explained the new exhibit as an example of Bennington Museum presenting the history of creativity in Vermont as a history and a contemporary art museum, holding a conversation between historical and artistic eras to inspire present and future artists.

Franklin said the idea of pairing Field and Neel, despite their chronological separation, came from Field’s portrait of Lumen Preston Norton from the museum’s collection. Beyond certain visual parallels, Franklin said, Neel’s tendency to paint portraits of children and families unites the two artists through their subject matter, and Field’s standing as a folk artist in American art history also connects his work to Neel’s later paintings.

Born in Leverett, Field apprenticed as a young man with Samuel F.B. Morse, one of America’s most esteemed portrait painters of the era — although he is better known for Morse Code, his contributions to inventing the telegraph and introducing photography to America in 1839.

After three months studying with Morse, Field began his career as a travelling portrait painter, eventually coming to Bennington around 1840. During his time in Vermont, Field painted several members of the Norton family, owners of the successful Norton Pottery firm.

Several of these paintings are in the museum’s permanent collection, including portraits of the young Lumen Preston Norton and Julius Norton, his father.

Stylistically, Franklin said, Field’s portraits show traces of the Grand manner style, a classically inspired approach to portraiture popularized in 19th century England. When portraiture lost favor after the introduction of photography (coincidentally by Field’s former teacher), Field would turn his attention to biblical and historical images, like his most ambitious work “The Historical Monument of the American Republic.”

But he is mainly remembered as an itinerant portraitist, with work in the famous exhibition “American Folk Art: Art of the Common Man 1750-1900” at the Metropolitan Museum of Art in 1933 — an exhibition that helped 20th-century contemporary artists embrace folk art as part of the mainstream.

“We tend to think of folk art and modern art as distinct things, but back in the 1940s folk art was very much considered part of the larger picture of modernism,” Franklin said.

As part of this exhibit, he said, he wanted to explore how the progressive modern artists looked at folk art in that period and how it influenced them visually and conceptually. Alice Neel was one of these progressive painters.

“(Neel) moved to Greenwich Village right before that exhibition opened up,” Franklin said. “She was in New York City at the time that folk art started to become popularly embraced by artistic circles in New York City. But she never really broke through in the ‘30s and ‘40s, and then abstract impressionism hit.”

Because of her deep-seated commitment to humanism — the value of human beings — tied into her communist political beliefs and social activism, Neel continued painting portraits even though the height of abstraction’s popularity.

“It wasn’t that she disliked abstraction, but it was that she felt that in order to convey the ideas that were most important to her, which was the significance of humanity, she had to paint humans,” Franklin said.

Some of the most effective paintings in the Bennington Museum exhibition are Neel’s portraits of her daughter, Isabetta, who she was estranged from in her daughter’s youth, he said. The harrowing, ghostly skin tones reflect Neel’s grief and sorrow over the situation, which caused a mental breakdown during her career.

When her work hangs alongside Field’s portraits, the influence of folk art on her composition and perspective is both logical and apparent. In the last decade of her life, Neel moved to Stowe and continued painting in a renovated log cabin, and she is now buried in the town. For the exhibit, the Bennington Museum has borrowed several paintings from Jonathan Brand, a reknowned photographer and Bennington native who, Franklin said, knew Neel as a mother-like figure. The exhibition will include some of Brand’s photographic portraits of Neel alongside her paintings.