Posted on March 19th, by Jack in Articles, Bennington Banner, Writing. No Comments 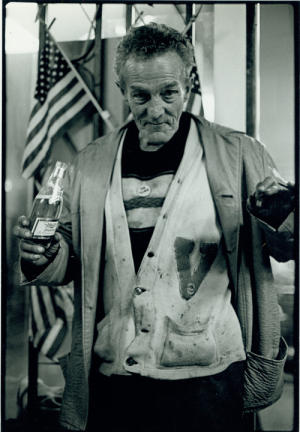 Museum curator Jamie Frank lin said he chose the 28 photos on display for their “strong visual power,” and also because he felt they accurately represented the types of subjects that Hubbard most commonly photographed.

As the Banner’s sports editor, Hubbard naturally took many photographs of local athletes — especially high school and student athletes — engaged in competition or overcome with the emotions of victory and defeat, but he was also interested in photographing the people he encountered every day around Bennington, from his co-workers at the Banner to his many friends around town.

Franklin said Hubbard had a particular interest in befriending and photographing the other young, artistic, progressive types around town, as well as those on the fringes of society, like his friend Harold E. Stammel, who appears in two of the exhibition’s images.

“He was taking photographs of people that might not have otherwise left a trace,” said Franklin. “Like Harold — [Hubbard] has descriptions of [Harold] sleeping in somebody’s car, because he was ap parently homeless. But [Hub bard] took dozens of photographs of [Harold], and now he’s here. He’s on the walls at the museum. There’s something to be said for that.”

“They’re not cliche images,” Franklin said. “It’s not him looking in from the outside and photographing this homeless man. He became his friend. He became a close friend and developed a relationship with him, and I think that comes across in the images.”

Hubbard also enjoyed meeting and photographing older Ver monters. One image on display shows Shaftsbury native Pheobe Moon Bump, pictured happily at home on her 90th birthday. In an unpublished manuscript excerpted by the museum, Hubbard wrote of his meeting with Phoe be, showing his affection for the area’s elders.

” ‘I don’t look 90, do you think?’ she questioned me after I had put my camera up and we sat at a table with an oil cloth covering. I said no then. But she did, she looked every part of 90 years, 90 hard Vermont years. There could be no better way to look.”

Although Franklin and the museum have identified the subjects of almost all the images on display in the exhibition, a large percentage of the subjects in Hubbard’s other portraits had not been identified before the exhibition opened. How ever, thanks to members of the Bennington community who gathered for a Bennington Historical Society presentation on Sunday, March 16, the museum now knows the names and biographical information about many of Hubbard’s subjects.

Armed with pencils and note paper, many of the Bennington residents who knew Hubbard during his time in Bennington gathered to re-attach names to the familiar (albeit younger) faces in his photographs. The images started to come alive as they pointed out high school classmates, children they once babysat, friends’ parents and even portraits of themselves — the previously anonymous portraits becoming rich biographies of each subject as the crowd started to remember their names, jobs, siblings, children and personal histories.

At the event, several of Hub bard’s friends in town offered their own stories about the photographer, who passed away in 2010. Tyler Resch, the museum’s librarian and former editor of the Bennington Banner, explained the newspaper’s tradition of running weekly “photo pages,” which Hubbard often filled with his portraits. Historical Society member Ted Bird showed the crowd a special copy of one of these photo pages — Hubbard’s very last, dated Nov. 4, 1978. Ted Downing, who said he befriended Hubbard during his time as the local basketball statistician, said that Hubbard inspired his interest in photography.

“One of the things that has astounded me about this whole project is just how passionate people are about these photographs,” said Franklin, watching Hubbard’s old friends pore over the images.

While he says he set up the exhibit with aesthetics in mind, the images have resonated with the people of Bennington.

“I was just making these choices because I thought they were good photographs,” he said.