Posted on April 10th, by Jack in Articles, Bennington Banner, Writing. No Comments 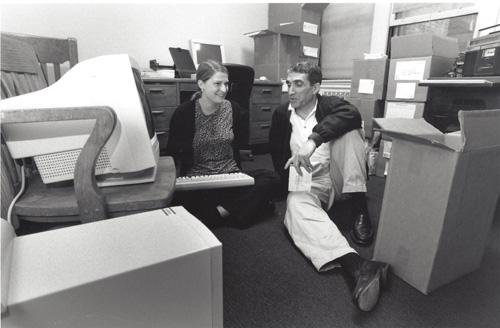 Now an assistant professor at the University of Massachusetts Lowell, Dietz became the director of the program as a graduate student, overseeing a year-long open call that received 18,000 written responses from poetry fans around the country, a staggering number considering the lack of electronic communication at that time.

“If we were doing the project now, it would be completely different,” said Dietz. “Who knows how many emails, tweets or Facebook posts we would get?”

After creating an online video series of Americans reading and discussing their favorite poems (which you can watch on favoritepoem.org), the project has grown to incorporate live readings, like the one taking place at Southern Vermont College this evening.

In partnership with the Bennington Free Library, the Robert Frost House, Hiland Hall School and Mount Anthony Union High School, SVC will host the program, “A Community Reads Favorite Poems,” with readings by students, their family members, and faculty and staff from SVC and the other participating schools. This will be the second time SVC has hosted an event like this.

“I was at last year’s event, and it was a total blast. It was a wild success,” said Daisy Levy, an assistant professor in SVC’s Hunter Division of Humanities.

“We had people from pretty much every generation represented,” she said. “I think the youngest person who read a poem was maybe 5 or 6, and there were also people in their 80s.”

Dietz will read a favorite poem of her own at the event, although she says it’s hard for her to pick a single favorite. While she said she sometimes reads “At The Fishhouses” by Elizabeth Bishop or Ezra Pound’s translation of “The River-Merchant’s Wife by Li Po at events like these, Dietz said this time she’ll be reading Dylan Thomas’ “Do not go gentle into that good night.”

She has known the poem all her adult life, she said, but her understanding of it changed completely when her father recently passed away.

In addition to the community reading, which is scheduled for 7 p.m., Dietz will also give a talk, “An Invitation to Poetry,” earlier in the afternoon. In this talk, Dietz said, she’ll talk about the appeal of poetry, how it has survived as an ancient art, some of its unique characteristics and why children love poetry — until they’re taught not to.

The mother of 6-year-old twins, Dietz said her own children love poems, poetry, rhymes and rhythmic songs. However, she has noticed many children stop loving poetry in this way as they grow up.

“I think, at a certain point in school, students start to encounter poetry not as an art to be enjoyed, but as something to be decoded or fully understood,” she said. “I think it takes some of the mystery and excitement out of the art. Not that analysis is not important, but I think students start to think they can’t understand poetry, just because of the way it’s often taught.”

To address this problem, Dietz and the Favorite Poems Project have started inviting elementary, middle and high school teachers to Boston University every summer to discuss poetry and help them form lesson plans that emphasize poetry as something to be enjoyed rather than dissected.

Dietz said one of their goals is to remind students you can appreciate a poem without needing to understand every single word of it.

“There are a lot of things we don’t fully understand that we still love,” she said.