Posted on April 23rd, by Jack in Articles, Bennington Banner, Writing. No Comments 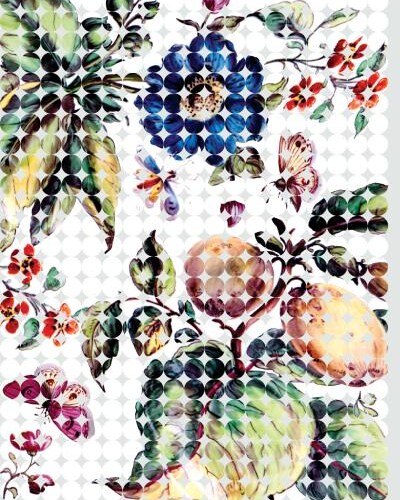 “When I discovered ceramics,” said Hatch, “I found there was an intimacy of being able to take the drawings off the wall, and out of a frame, and put them into your hands, and into something that is functional.”

The relationship between function and aesthetics factors into pretty much every one of Hatch’s works, from her recent installation at the High Museum of Art in Atlanta — a grid of 456 dinner plates that shows a two-story floral image — to her stationery and wallpaper patterns with drawings of historical vases and other household objects.

“I really enjoy asserting objects as drawings and drawings as objects,” Hatch said. “I try to get someone to take a second look at an object I’ve made and think about it in a different way than they would if it were just a plate. My over-arching goal is to have people go back to their home and take a second look at the things they live with.”

While she uses imported plate blanks from Italy in her grid-based “plate paintings” to minimize distracting variations within the work, Hatch throws and turns her own plates, pots and other clay objects for her less-uniform designs, like the irregular oval-shaped paintings she recently displayed at the Museum of Fine Arts in Boston. She also creates full-scale prototypes of most of her designs intended for mass production.

Represented by Todd Merrill Studio Contemporary, Hatch’s one-of-a-kind pieces and mass-produced designs often reference the visual styles of the 1700s, a century she considers to be the pinnacle of quality, craftsmanship and detail for handmade objects. By borrowing techniques from printmaking, and mixing modern and traditional methods, Hatch’s works capture the elegant, yet imperfect, characteristics of the fine handmade goods popular in 18th-century European society.

Anthropologie shoppers may recognize this style, as Hatch has collaborated with the company to design more than 200 different objects over the past four years. Hatch said the company originally wanted to buy her works for wholesale to sell at its stores, but her methods were too time- and labor-intensive to meet their price points. Instead, she opted to license her designs for the company to mass produce for retail sale.

“I would have had to change how I was working to make it inexpensive enough for them,” she said. “I wasn’t willing to sacrifice the level of surface decoration.”

This opportunity opened the door for Hatch to experiment with new ideas that she wouldn’t have tried on her own. When she first started, Hatch said, she wouldn’t have been able to imagine working on the types of projects she’s doing now.

“I didn’t understand what the potential was for someone who is interested in surface drawing,” she said. “I understand objects and how to break up space, so it leads naturally to being a surface-pattern designer for other objects. I just didn’t have the resources to make an apron or other objects that my work would do well with.”

Hatch’s work with Anthropologie has also helped her move into other areas of design. She now designs patterns for wallpaper, fabric, stationery, furniture and lighting fixtures. Her success as a designer has bolstered her fine art career, letting her split her time between design work and larger conceptual pieces.

As much as she has enjoyed her two-pronged art career so far, Hatch says she still has ideas and goals for the future.

“I have a daughter, and I would love to make things for her,” she said, “but I think my biggest idea is I would love to play around with garments and apparel. I love the idea of designing clothing and fabric for clothing.”

“That’s a little bit of a fantasy,” she added, “but maybe it will come true.”