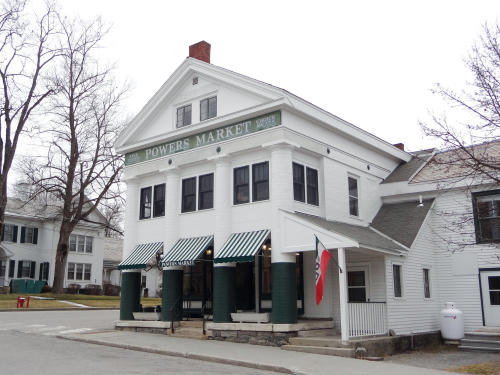 An imposing presence on Main Street, Powers Market once held North Bennington’s post office and has acted as a company and general story for more than a century. Local legend Larry Powers started working at the store in the 1920s, when he was only 6 years old, working his way up to owning the store when he returned from serving in World War II.

Known as “Mr. North Bennington” for his active involvement around the village, Powers literally wrote the book on the village — his local history books “The Store and Other Stories of North Bennington” and “Paran Creek Memories: North Bennington Stories” are both available at the market. Although Powers sold the store in the 1980s, its subsequent owners have kept his name in affectionate tribute.

“[Larry] was involved in all sorts of civic, municipal and conservation duties in North Bennington and on a state level, and he was both influential and very intertwined with the fabric of the community,” said Maria Scully, the store’s current owner. “I’m pleased to have kept his name on the store, and I have no intention of ever changing it.”

Today, Powers Market remains the heart of North Bennington. Along with coffee, baked goods, snacks and a wide variety of sandwiches, the store stocks an impressive range of foods produced in Vermont and locally, including eggs, yogurt, maple syrup and other foods from farms in the area. With Vermont-themed decor and huge shelf of books by local authors, the market has also become a popular daytime gathering place for locals and college students.

“This place is North Bennington,” said Beatrice Berle, dropping off a shipment of organic yogurt made on her family’s farm in Hoosick, N.Y.

Built in 1903, the historic brick building that now houses Kevin’s also served as North Bennington’s post office in its time. The building has operated as an eating and drinking establishment since the 1920s, a tradition that has continued since Kevin and Lindy Lynch took sole control of the business in the late ‘90s.

Not only the owner and namesake of the business, Kevin Lynch is also the chef, and regulars rave about the carefully-prepared burgers, steaks, seafood, salads and sandwiches on the menu. Kevin’s has also become known for its weekly theme nights, like Tex-Mex Wednesdays and Italian Thursdays, each with their own special dishes.

In a new development for the village, the former Merchant’s Bank building — now owned by a pair of Vermont-based non-profits, the Fund for North Bennington and the Preservation Trust of Vermont — has been reconfigured for office and community use, and now hosts a series of yoga classes with local teachers Tracey Forest, Tasha Judson and Beth Conkey, as well as a weekly ukulele group with instructor Lisa Carton. Forest, Carton and Deena Chappell also performed the Left Bank’s first concert earlier this month as Three Graces.

“I really think the space is just what a tight-knit community like North Bennington needed to become even more alive,” said Conkey. “I’m so happy I can be a part of its debut!”

This is only a small selection of North Bennington’s many offerings. A trip to the village wouldn’t be complete without a visit to the beautiful Lake Paran, the historic Victorian Park-McCullough house or the Vermont Arts Exchange on Sage Street, a retired mill that now hosts art classes and the Basement Music Series with both local and national touring acts.

For a first-time visitor or a native, it’s easy to enjoy an afternoon in North Bennington.