Posted on January 23rd, by Jack in Articles, Bennington Banner, Writing. No Comments 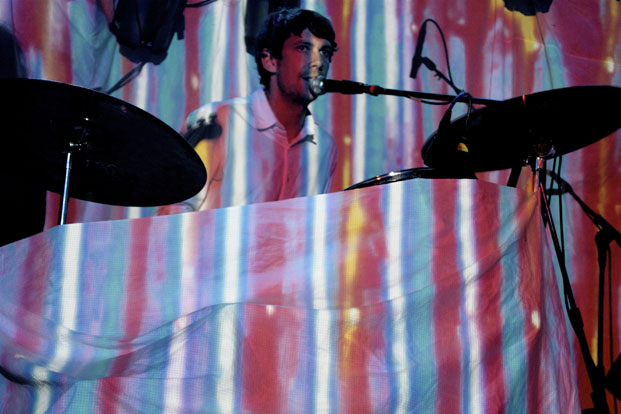 Tim Walsh: Well basically, Connecticut is a small place. Jeff and Dan had connected with each other when they were in their teens. They played jazz in and around the state, then both of them went off to college. I grew up on the other side of Connecticut. I never met them at that age, but I started working with Jeff in 2007, and we worked together when he was on and off the road. He introduced me to Dan in January of 2009, and we were doing another project together, backing a couple. After we put that project to bed, we started The Stepkids as an offshoot of it.

JM: The Stepkids is something of a departure from what you guys were doing before. Was that your intention from the beginning?

TW: When we started, we were really influenced by indie bands, which musicially was a departure from previous things that we had all done. We loved what Grizzly Bear was doing, and the Dirty Projectors and Animal Collective. We said “Well, we grew up on soul music, too,” as well as the music those bands may have been influenced by, like 20th century classical or Van Dyke Parks — so we mixed that stuff into our songwriting.

JM: What drives The Stepkids more — your influences or the urge to experiment?

TW: I think it’s a little bit of both, but it definitely starts from our influences. It doesn’t start in a vacuum. It starts when we hear another artist do something, and we’ll make a decision to adapt it, or borrow from that to create something new from it.

JM: How do you think your band has changed since you started?

TW: We evolved the sounds on the second album to be a little bit more high-fidelity. We were definitely influenced more by modern sounds. And when I say modern, I mean, like, if you listen to a Kraftwerk album — even though its from the late ‘70s or early ‘80s — they still feel like full-range, full-bodied recordings. Hearing that, it made us want to move toward a high-fidelity sound. The first album was a little bit more lo-fi, with a bit more of a novelty production style. It just became an element of wanting to improve ourselves, both in our recordings and with our career.

JM: How was the process of adapting your studio sound to a live experience?

TW: [The Stepkids] definitely grew out of the studio first. We recorded the first album before we ever played a show, so there was that engineered method where you’re creating the concepts, creating the product and then performing that particular creation. So we did start doing live stuff later, but we really wanted it to be different than just the recordings. We’ve adapted different parts for the instruments that we play, and some of the arrangments changed so that it felt more alive. The songs have evolved since the recordings were made.

JM: Have you ever been to Mass MoCA?

TW: I have, yes. I went a year and a half ago to see the Sol LeWitt exhibit. It was really cool — I enjoyed the space. I’ve only been out to the Berkshires a handful of times, and it’s really cool to see a place like that that has grown new things from its industrial roots. I’d compare it to Bridgeport, Conn., where we record most of our music. Bridgeport is also a post-industrial town, and there’s a lot of revitalizing of old buildings — the building where I live is actually an old department store.

JM: How do you think your music fits into the modern art world that Mass MoCA represents?

TW: Our project grew out of the studio that I live in, so there’s a surface connection to the re-invention of industrial space and using it for the arts — my building has a gallery on the bottom floor, and it’s a building full of artists. So there’s definitely a common interest in community and how creating artistic spaces can help a community in general.

Musically though, as opposed to just culturally, I think it’s also a good fit. I know they show some post-modern art, which deals heavily with the ideas of choice and what the artist believes is of value to the audience. For us, half of what we’ve created is a tribute to people who we respect as artists, but it’s also a tribute to where music can go in the future. I think any modern art museum is interested in the forward momentum of “this could be the future” or “this is a diverging from a previous direction in art trends.” It’s always good to have a large variety of that.

Last time I went, it was really great to see exactly that, a large variety of modern art and also some of the older facets of modern art, like Sol LeWitt.

I think there is a bit of the experimental, and I think people consider our music experimental, that does belong in a gallery. We do a light show as part of our live show sometimes — we haven’t been doing it recently, but we always felt like that was a visual art-oriented piece. It’s more interactive and appropriate for that type of space.